Cherry Pie is a indica dominant hybrid of Grand Daddy Purple and Durban Poison. Although it is hard to find the authentic version of this particular medical marijuana strain, it definitely will not be hard to believe that this is the best type of strain.

In structural composition, it has dense buds with orange hair all over and displays a slight tint of purple. Inspiring the name of this medical marijuana strain, the aroma is that of cherry pies.

It is most commonly used by patients who are suffering from evident symptoms of PTSD, anxiety, bipolar disorder, migraines and other stress-oriented syndromes.

Although it may cause dry eyes and mouth upon use by the patient, it definitely helps in elevating the level of euphoria, relaxing body and mind, uplifting moods and focusing the conscience.

For patients who are specially looking for something that would ease muscle stiffness and related ailments, this can definitely prove its rescuing ability. Conclusively, this is the best kind of medically favorable marijuana strain that patients prefer above all others;

it diminishes the above mentioned syndromes in the most relaxing order and even though sedation may cause irritation, but its value is still undeniable.

Cherry Pie, sometimes known as Cherry Kush, is a popular and potent indica-leaning hybrid. This strain is a cross between flavor-packed indica Grandaddy Purple and strong sativa Durban Poison, and it offers smokers some of the best characteristics of both parent strains.

Cherry Pie’s balanced and mind-expanding high is enjoyable in a wide variety of settings.

This versatility, along with the strain’s tart and fruity taste, has made it a staple in dispensaries nationwide. Cannabis testing lab Analytical 360 has tested multiple samples of Cherry Pie flower and has found consistently high levels of THC, with an average of about 20{3433c7c685f52ec9a5b6a432556eb70204931005bf8025c4caa07a56b18d7833}.

Cherry Pie’s flowers are small to medium in size and have a bud structure characteristic of other predominantly indica strains. The tightly-curled leaves are densely packed together and threaded through with vibrant orange pistils.

Leaves appear mostly mossy green, although some phenotypes show off flashes of purple; this latter color is due to high concentrations of pigments in the plant’s genes (passed on from Grandaddy Purple) that highlight colors other than green when they’re stimulated by cold temperatures during the growing process.

The colorful buds are coated in translucent white trichomes, giving the small nugs a silver sheen and a very resinous texture.

When Cherry Pie is properly cured, a sweet, rich cherry flavor jumps off of the buds, accented by some light herbal and floral notes.

More dank, hashy notes linger underneath and are brought forward when the buds are ground up or broken open. When it’s combusted, Cherry Pie gives off a smooth smoke that’s easily inhaled and on the exhale tastes toasted and biscuity with a hint of sweet fruit.

Smokers should keep in mind that this strain can be especially pungent; those concerned with discretion should take any needed precautions.

Cherry Pie has a high that mounts slowly, beginning as a progressive feeling of relaxation. At first, smokers may detect a slight pressure in their sinuses. After several minutes, Cherry Pie dissolves tension in the core and limbs and facilitates deep, easy breathing.

Users may feel like any mild, short-term worries or stressors have evaporated. This pleasant sensation can be the perfect accompaniment to a morning cup of coffee or an evening cocktail.

As the high progresses, this strain’s sativa side emerges, working on the user’s perceptions. Visual or auditory stimuli can take on new intensity, and otherwise mundane thoughts may seem markedly more interesting.

This is not to say that It easily veers into paranoid, overly cerebral territory, though. The strain’s relaxing indica foundation allows most smokers to coast through the trip while encouraging creative and analytical work.

Because it works on both the body and mind, It is good for activities that involve both, like video games and exercise. In the right setting, it can also be a powerful aphrodisiac.

For medical cannabis patients, It has both psychological and physiological applications. It can help those plagued by anxiety, depression, and PTSD to spend their time more presently and mindfully.

Its unique combination of mental acuity and physical relaxation can also benefit those with attention deficit disorders to devote great concentration to single tasks.

Although It’s provenance is murky and no high-profile breeders claim to have originated the strain, several producers have made its seeds available for sale online.

It can be grown in or outdoors, although successful outdoor cultivation calls for a warm, humid, Mediterranean-like climate with consistent daytime sunlight.

Plants grow short and bushy with wide lateral branching. Growers may need to periodically trim away any light-blocking fan leaves in order to maximize the growth of any low-growing flowering nodes.

Those looking to bring out this strain’s eye-catching purple bag appeal should also expose the plants to colder-than-average temperatures during the growing process. It flowers within 8 to 9 weeks when grown indoors and is ready for harvest in late October when grown outdoors.

With a potent high that manages to leave users fully functional, It has secured a household name among well-balanced hybrids. It’s as enjoyable out with friends as it is on a slow night at home. 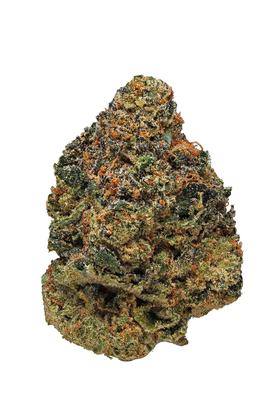 The Cherry Pie cannabis strain is a well-balanced hybrid that emits a piney, hash-like scent and tastes of spices with a fruity, cherry undertone. Its leaves are a forest green with dense, light-green buds displaying hues of purple and velvety orange hairs when ready to harvest.

It’s high has been reviewed to be easy on thought-processes, so many keep a clear head while experiencing increases in mood. It also increased appetite for some.

It also gives a body high according to consumers, easing mild insomnia, allowing the muscles to relax and minor aches to dull. It is a great strain for both those new to the cannabis scene and veterans alike if consumed properly.

The most notable ill side-effects are dry mouth and eyes, with a few reporting a slight surge of dizziness that dissipates quickly.

It grows best in Mediterranean climates with a flowering time of eight-nine weeks.

Cherry Pie also gives a body high according to consumers, easing mild insomnia, allowing the muscles to relax and minor aches to dull. Cherry Pie is a great strain for both those new to the cannabis scene and veterans alike if consumed properly.

What does It smell like?
The scent of Cherry Pie is hashy; earthen but with cherry undertones. ​​​​​​​
What does It mean?
This strain gets its name from its delicious spicy, fruity scent and flavor reminiscent of the baked confection.

Be the first to review “Cherry Pie” Cancel reply