Runtz is an elite, sought-after strain that has been receiving a lot of well-deserved hype. The first time we grew it, the reason for all the hype was obvious. Runtz is absolutely covered in frost with some purple and violet hues mixed in.

Runtz was created through a delicious cross of the infamous Zkittlez x Gelato strains. Runtz brings on a delicious fruity flavor with tropical citrus and sour berries with a spicy pineapple aftertaste. Runtz has been tested as high as 29{3433c7c685f52ec9a5b6a432556eb70204931005bf8025c4caa07a56b18d7833} THC. Gelato Runtz

Gelato was created through a cross of the famous Sunset Sherbet x GSC (f.k.a. Girl Scout Cookies). This tasty strain is famous for its delicious flavor and euphoric high. This strain has a flavor that’s said to be much like a sweet sherbet, with fruity blueberry and orange flavors.

The aroma is just as sweet, with a lavender citrus berry bouquet. For fans of Gelato #33, this cross will exhibit strong Gelato genetics with some Runtz to give it some variation.

130cm. You’ll receive a rewarding yield of 450–500g/m² after a flowering time of 8–9 weeks. Runtz also grows to a medium height when cultivated outdoors. Here, she’ll produce a harvest of up to 500g/plant. Prepare to harvest your crop in early October.

Runtz produces visually stunning and aesthetically rare flowers. Her buds are compact and nugget-like in appearance. Expect to be treated to beautiful shades of deep purple and dark green. Bright orange pistils pop on this multicoloured canvas.

Her medium height makes her easy to control in almost all environments. Runtz displays a typical indica growth pattern and plenty of lateral growth.

You can tame her wild side by using techniques such as topping and low-stress training. This will help to open up her dense canopy and expose bud sites to more light. 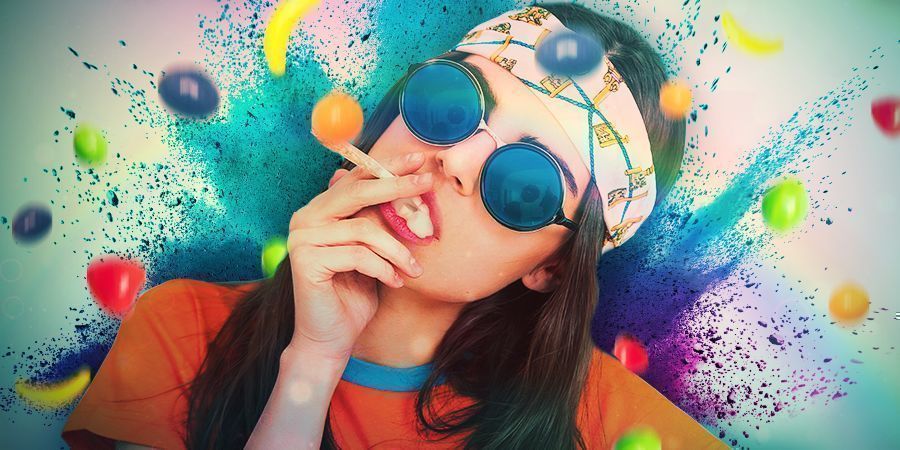 After hitting a bong or blunt, you’ll notice the immediate onset of her sativa qualities. Her cognitive effects include a surge in motivation, a social mood, and the desire to get up and move.

During this portion of the high, she’s the perfect strain for outdoor activities. Hit the hiking trail with friends and delve deep into conversation as she supercharges your central nervous system.

Eventually, the high tapers off into an indica body stone. The muscles relax, the mind becomes still, and the appetite begins to increase. Now, it’s time to get comfortable. Cook some food, put on a good film, and snuggle up in some blankets.

Delicious tastes of candy and fruit infuse every hit. Take her high to another level of potency by cooking up a tasty batch of edibles. Runtz features high levels of the terpenes caryophyllene and limonene. These molecules provide additional tastes of pepper and lemon.

If you love the sound of Runtz strains, but don’t have the time to tend to all the needs of a photoperiod strain, then we have just the thing for you. Runtz is also available as an autoflowering variety: Runtz Auto.

Runtz Auto retains the same famous flavours and effects as photoperiod Runtz strains, but completes its lifecycle in 10 weeks or less, and requires significantly less maintenance.

Granted, if you want the biggest yields and the most extreme potency, then the photoperiod version is better suited to you, but rest assured that Runtz Auto still delivers.

And it gets even better. Zamnesia and iGrowCan have collaborated to make growing Runtz Auto one of the easiest things in the world. The iGrowCan is an all-in-one grow kit that makes growing autoflowering cannabis seeds unbelievably easy. Gelato Runtz

Simply plant the seed in the can and follow the included instruction. In short, these require you to water regularly and feed with the included nutrients. Other than that, give it as much light as possible and watch it flourish. After that, you can sit back and sample your own homegrown high grade.

RUNTZ HAS IT ALL. Gelato Runtz

Runtz provides unique flowers with a monumental amount of THC and tasty terpenes. The strain offers great yields both indoors and outdoors while remaining at an easily manageable height. Just remember, take things slow. A THC content of 27{3433c7c685f52ec9a5b6a432556eb70204931005bf8025c4caa07a56b18d7833} can be a shock to the system!

So buy gelato pink runtz strain. Are you looking to get the very best cookies ?, Our online shop is the ideal place for you to get the best deals. We offer good deals ranging from bulk and small orders. Our product is second to non, our delivery speed is best.

Our refund policy is in place . Your security is our priority. Our customers are king as we make the competing of their orders right up to delivery our number on priority.

Feel free to navigate our shop page and get the very best for you on your friends. Get your gelato with our online shop onwards. So, continue to buy gelato pink runtz strain.

Gelato (also referred to as “Larry Bird”) is a tantalising hybrid cannabis strain from Cookie Fam and Sherbinski.

Following in the footsteps of its parents Sunset Sherbet and Thin Mint GSC. This Bay Area, California native gets its name from the fruity, dessert-like aroma, a common genetic thread among the Cookie family.

Her buds tend to bloom in dark purple hues illuminated by fiery orange hairs and a shining white coat of crystal resin.

So, Pink runtz has always represented a lifestyle of excellence, quality, and taste. Living the best life possible and always striving to grow. We represent this lifestyle best through our cannabis, and we constantly strive to produce the highest quality and most diverse cannabis on the planet.

Our exclusive genetics and high standards, and all the people who share this vision with us, will continue the dream here

The aroma is very similar, although with a sharp spicy pineapple effect that turns slightly pungent as the sticky little nugs are broken apart and burned.

The Runtz high comes roaring in a few minutes after your final toke, first hitting your head with a calming lift before spreading its tingly tendrils throughout the rest of your body.

As the Runtz high expands, you’ll begin to feel a deeply calming effect spread through your limbs, leaving you totally sedated and couch-locked, immovable for hours and hours on end before you finally fall into a deep and peaceful sleep. Gelato Runtz

Be the first to review “Gelato Runtz” Cancel reply